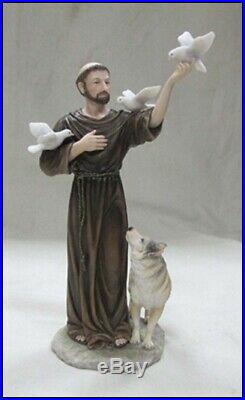 Francis With Animals – 11-inches Tall – Detailed Fully Hand-Painted Statue. Francis With Animals -11-inches Tall – Detailed Fully Hand-Painted Statue. Brand: Goldscheider of Vienna. Francis is standing with a wolf and is holding a dove with two doves on his garment. Ships to the lower 48 states only! Ships directly from Goldscheider of Vienna, located in New Jersey. The Legend of St. Francis With The Wolf. The story of how Saint Francis the Wolf of Gubbio is one of the great legends linked with the life of the saint. I have never been too worried as to whether the story was historically true or not. In this well-known legend, Saint Francis goes to the Italian town of Gubbio, where a fierce wolf had been terrorizing the village and even killing some of the people, including children. During his visit to Gubbio, Francis goes out to meet the wolf. You can find an account of this event in The Little Flowers of Saint Francis, a 14th-century collection of stories about Francis and his companions. According to the story, when the wolf sees Saint Francis, he comes charging at the saint with his mouth open, ready to attack. Saint Francis immediately makes the sign of the cross over him and says, Come here, Brother Wolf. I command you on behalf of Christ that you do no harm to me or to anyone. As soon as Saint Francis did this, notes The Little Flowers, the fearsome wolf closed his mouth and stopped running; and once the command was given, it came meekly as a lamb, and threw itself at the feet of Saint Francis. Then Saint Francis scolds Brother Wolf for destroying and killing the creatures of God. The whole town is complaining about you, Francis tells the wolf gently. But I want to make peace between you and the people. And so I promise that I will have food given to you regularly, Brother Wolf, by the people of this town so that you will no longer suffer hunger. And I want you, Brother Wolf, to promise that you will never harm any human person or animal. The wolf showed agreement by simply bowing his head. And so Francis asks the people of the town if they will promise to provide food for wolf regularly. They all say they will. Finally, Saint Francis asks the wolf to give a guarantee in front of all of the people that he will no longer inflict harm upon the people of Gubbio or its animals. Then the wolf, lifting his right paw, placed it in the hand of Saint Francis. Because of this actionthere was such rejoicing and wonder among all the peoplethat they all began to cry to heaven, praising and blessing God who sent Francis to them who, through his merits, had freed them from the jaws of the cruel beast. Written by Jack Wint. 99% of the time it can be resolved. We are a small but quickly emerging Tennessee company that handpicks immaculate fine Catholic jewelry pieces, rosary, art, and statues for their customers worldwide. Our excellence in customer service is unsurpassed with fairness, dignity, and respect, We wish you a fulfilling shopping experience. The item “St. Francis With Animals 11-inches Tall Detailed Fully Hand-Painted Statue” is in sale since Saturday, September 14, 2019. This item is in the category “Collectibles\Religion & Spirituality\Christianity\Statues & Figures”. The seller is “catholicgem” and is located in Clarksville, Tennessee. This item can be shipped to United States.